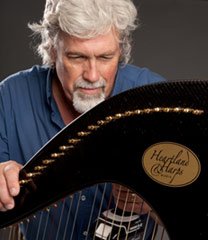 Heartland Harps Founder and CEO, Dave Woodworth, began building wood harps in 1984, and for the next 25 years, Heartland built more than 1,700 wood harps in a variety of models. In 2001, Dave married professional harpist, Pamela Bruner. Pamela did the hand-painted artwork on the wood harps and, with her help, the design and sound of the harps continued to evolve through the years, including into new materials like carbon fiber.

In 2009, Heartland fused the art of harp-building with cutting-edge technology and introduced the world’s first harp fabricated from carbon fiber—creating a harp that is lightweight, impermeable to the elements, and virtually indestructible. To date, we’ve built more than 1,000 carbon fiber harps for delighted customers all around the world.

2020 has been a tough year for Heartland Harps and for Dave, personally, along with the rest of the world.  We’re hanging in, though, and waiting for some semblance of ‘normal’ to return, whatever that is.  We will get back into full production as soon as the pandemic and our suppliers allow.